Your shopping bag is empty

Go to the shop

Great to have you back!

Don’t have an account?Register now
Register
Back to login

Recently, fast foods (also known as junk foods) have replaced balanced diets. Fast food is being consumed by people of all generations and age groups; thus, a shift in consumption pattern from traditional foods toward high value and processed foods can be seen. The term "junk food" is widely used worldwide to describe foods that seem to have extremely little or no nutritional value but are heavy in sugar, salt and fat. A majority of Indian fast foods are deep-fried and are high in saturated and trans fats.

Indian fast food has a greater trans-fat level compared to western fast food, e.g., paratha, bhatura, and puris have a high trans-fat content compared to regular French fries. These high-calorie meals wreak havoc on our health cause metabolic alterations and disorders, including obesity, elevated blood glucose, high blood pressure and cholesterol, all of which are among the significant causes of mortality in India. Regular fast food consumption is associated with diseases such as obesity, hypertension, type 2 diabetes mellitus, cancer, and infertility.

What do junk foods do? 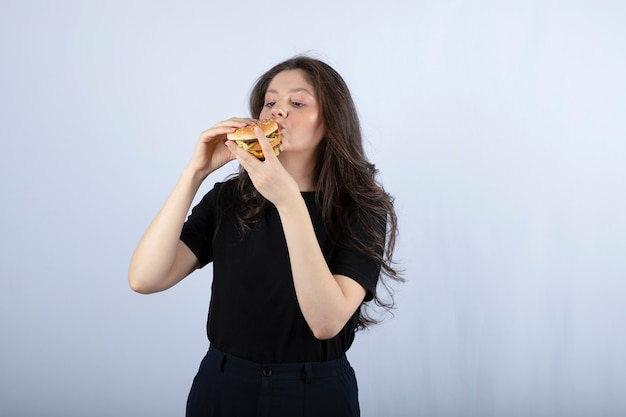 In a study conducted on adolescents, adolescents were more inclined toward consuming pizza, fries, lasagne, sandwiches, fast food, candies, ice cream, and other desserts compared to traditional cuisine. The appeal of such foods stems from their pleasant colour, flavour, availability, and ads.2 The problem is a majority of junk foods are prepared with partially hydrogenated oil or fried with oxidised oil, which causes radical cell damage. Moreover, fried items are prepared at a high temperature of >100°C, which leads to the development of aldehydes and ketones. Furthermore, junk foods contain high sugar and fat and low fibre, which promotes overeating. Because of the excess consumption of these foods, fat molecules from the food makes the brain ignore the signals of fullness from weight regulation hormones such as leptin and insulin. Consequently, you end up gorging on that type of food, thus leading to weight gain.

Females with polycystic ovarian syndrome (PCOS) suffer from Insulin resistance, which is a condition where the body's cells do not react to insulin in the way they should. Commonly, it is observed in obese or overweight females and those who live a sedentary lifestyle or have bad eating habits with little physical activity. Incidences of PCOS are increasing along with women's increased intake of junk food. Refined carbohydrates can cause inflammation that increases the possibility of insulin resistance and high glucose-salts-fats contents disrupts the hormone balance, worsening PCOS.

Foods that cause inflammation include processed or red meats, French fries, and margarine. Moreover, carbohydrates are present in sugar and are harmful; thus, sugar consumption should be completely avoided if you have PCOS. Not only foods but drinks such as juices and soda contain a high amount of sugar too. The commonly consumed junk foods in Indian households that can worsen PCOS and should be avoided are white bread, white rice, maida-containing food (pasta and naan), kachoris, paranthas, puris, carbonated drinks, lassi, sweet nimbu pani, high salt-containing snacks (namkeen, mathris, pakoras, samosas, and chips), cakes, and muffins.

Women with PCOS should stay away from foods with the high glycemic index, i.e. foods that increase the blood sugar levels rapidly because PCOS patients are already at a higher risk of developing diabetes. Cornflakes, cheerios, and coco pops, eaten during breakfast, have a high glycemic index. Moreover, white rice, white bread, chips, biscuits, and sweets have an increased glycemic index. However, milk and dairy products have a low glycemic index but contain saturated fats and high-calorie content. Opting for low-fat dairy products could be a possible solution.

To summarise, fast food is rapidly increasing in India because of urbanisation, globalisation and ease of accessibility. The change in dietary habits is giving rise to multiple problems, including PCOS.

Get a Free Diet Consultation by Expert Dieticians trained under gynecologists.
WhatsApp us on : +917208682067 The Diet consultant from the comfort of your home

How to Eliminate Dairy and Lose Weight Without Cravings?

7 best fruits for women of all ages What are the 7 Major Differences between PCOD & PCOS?

The Diet consultant from the comfort of your home

How to Eliminate Dairy and Lose Weight Without Cravings?

7 best fruits for women of all ages

What are the 7 Major Differences between PCOD & PCOS? On a mission to make Indian women healthy and fit

There are items
in your cart

With this product also buy: